The Conference League, starting this year, is a change that has many consequences. In practice, it means the creation of two UEFA cup worlds.

The first world is the Champions League and the Europa League.
As a result of the changes just made, the main problem is that all league teams that are below 15th place in the UEFA coefficient (based on five years in Europe) are now excluded from the Europa League!
In the Champions League it is still possible to play for national champions with more than 15th place in the UEFA ranking. However, these are only 4 places in total. 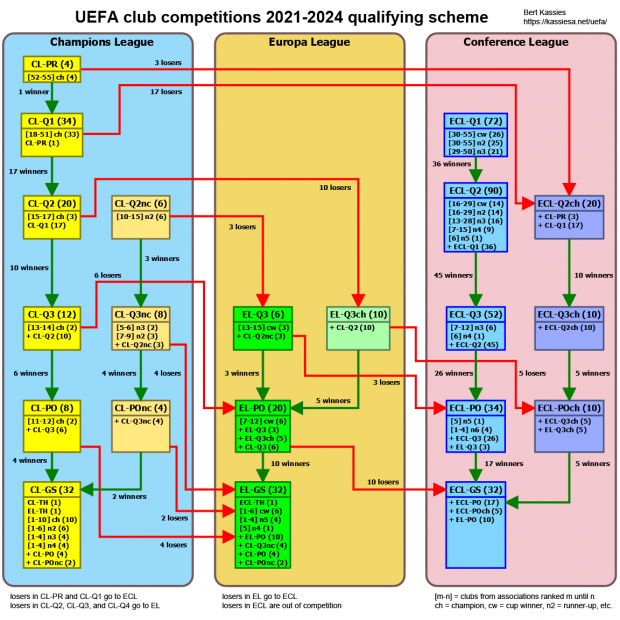 I am not saying that this division into two worlds is wrong. However, I would like to draw attention to the need to treat these two football worlds equally.

The Champions League, as the top league, which is becoming particularly visible in the current situation, should be organized with special care. The teams appearing in it have their loyal fans and even admirers, also far beyond the borders of the countries they come from. Television broadcasts will be watched by fans from all over the football world, not only from Europe. The reform of the competition, introduced from 2024, aimed at increasing the number of matches played, especially by the best football teams, should take these facts into account.
Therefore, I believe that playing the playoffs in the form proposed from 2024, in which the top 8 teams are not playing, is unacceptable. Especially right here in the reformed Champions League.

1. It is contrary to the assumed increase in the number of matches played by the best ones. There will be more matches, and in this solution, the eight best teams are taken away from 2 matches! That means losses on unsold TV broadcasts and tickets, and disappointment for fans around the world.

2. Using the playoffs as a mobilizing measure is a miss, as it will not apply to all teams anyway. It is much more effective to use positive mobilization instead of negative mobilization. Teams must be anxious to achieve the goal, the highest possible goal.

3. Playing much more matches must have a purpose. In practice, it serves to select the champion.

4. The issue of the super league needs to be resolved and the Champions League should be turned into a competition to replace it.

All this goals can be easily achieved with a single decision. It is the creation of two consecutive competitions from the Champions League: the league and the cup. In each of these competitions, a champion will be selected. Only this and so much.

I described the details in the topic: "New look to format of the Champions League from 2024". 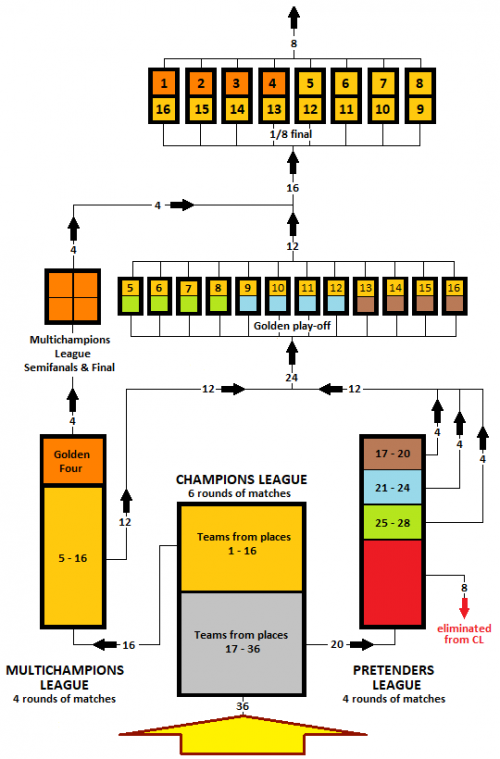 For the top eight teams that weren't supposed to play, interesting promotion games are offered instead. Including matches for the highest goal for four best teams, i.e. the championship. In addition, we also motivate teams from further positions in the league table to play. Their goal is to advance to the play-offs. Plus a new format championship that should eventually bring the idea of super league to an end.
Everything under the auspices of UEFA.

World of Conference League and …

Looking at the play pattern in the above mentioned game rule, it is L shaped. The vertical part is the league qualification and the horizontal part is the play-off drop-off principle. Currently, we have two such letters L. In order for the competition to have the same rules of the game in all three leagues, there must be three such letters L.

So in UEFA cup competitions the "LLL rule" should apply. Currently, the "LLI rule" applies.

CLL games as the lowest level of games may have a completely different course. They can be shorter than the other games and end after the group stage without having played the knockout stage.
In such a situation, using a group of 36 teams is the best solution.
For example, after 6 matches have been played, the single-game semi-finals and the final could be played between the top 4 teams. In such a situation, after 8 rounds of matches, the games would be over. 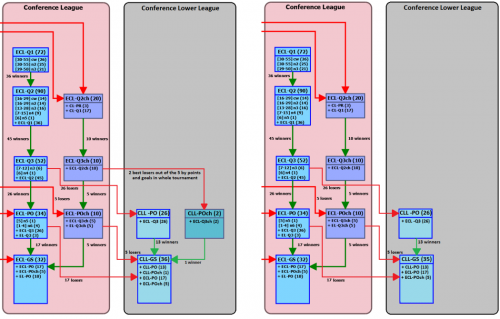 Both worlds of football should be treated equally fairly. If we create a world with two group stages for teams from the top 15 leagues in the ranking, then for teams from 16 to 55 places there should also be two such group stages. UEFA stage group matches must reach as many teams as possible. After all, this is where football talents are born in lesser-known teams. Let us give them a chance to appear in the full form of games.
The more elite UEFA games become, the more attention should be paid to those other teams for which the world of the Champions League and Europa League is closed. Teams cannot be excluded but must have a fair alternative.

To be fair, both game worlds must have two levels of the group stage.
Top
Post Reply
1 post • Page 1 of 1