New look to format of the Champions League from 2024.

New look to format of the Champions League from 2024.

I decided to write the next topic. I was motivated to do so by the "amirbachar" responses to my previous topic: “What should be the correct format for the Champions League from 2024”. They were painfully honest. Thank you for the truth written! It turned out to be extremely helpful and provoked to reflection.

The main problem with the new CL 2024 format is the playoff. I believe it should be played by all teams or not played at all. Not playing the playoffs by 8 teams is a loss for those teams due to the lack of ticket revenue and TV rights. It is also a loss for the fans, the lack of emotions that their team can provide. In the presented variant of the CL 2024 playoffs are treated as a means of mobilization. Better not to play the playoffs and be sure of promotion than to play the playoffs and risk dropping out. It is also not a completely effective measure, because 8 teams are still quite a lot to make 4-5 teams feel unmotivated to fight in the final phase of the tournament, due to the points scored. In my opinion, teams up to 10 matches should only be mobilized in a positive way. We get involved and play not because we are afraid of the playoffs, but because we are fighting for the highest goal - the championship. This is the key to the success of this part of the game!
If we add 6-8 matches played by the best teams against each other, then we have what we expect. The idea of a super league was unacceptable for many reasons. However, there is nothing wrong with the fact that the best want to compete more with each other. So let the best ones compete with each other in the league format. If we create a league for 36 teams, let it really be a league with a champion chosen at the end of the tournament.

I present a proposal which I believe meets all expectations and criteria.
1. It is objective and fair
2. Mobilizes to fight for 10 rounds of league matches
3. Allows you to play 6-8 (out of 10) matches of the best teams against each other
4. It is a response to a super league.

2. Each phase of the competition ends with a match for the championship.

4. 36 teams of league competition are divided into 3 pots of 12 teams.

If we arrange the match calendar as above, in the 5th and 6th rounds, the 24 best teams will fight for 16 places in the Multichampions League and no one will place reserve players for the matches.

5. Each team play 6 matches, three home and three away. Two with the team from each pot, one home, one away.

6. After playing 6 matches, 36 teams are divided into two leagues: the Multichampions League – best 16 teams and the Pretenders League – 20 teams finishing in 17 to 36th place.

7. 16 Teams in Multichampions League keep the points earned in the previous 6 matches. They are playing next 4 matches for the championship and the best position before the playoff.

8. 20 teams in Pretenders League keep the points earned in the previous 6 matches. They are playing next 4 matches for 12 places in playoff.

9. 16 teams in Multichampions League are divide into 2 pots. Each team play four matches. Two matches with teams in each pot, two home and two away.

10. 20 teams in Pretenders League are divide into 2 pots. Each team play four matches. Two matches with teams in each pot, two home and two away. 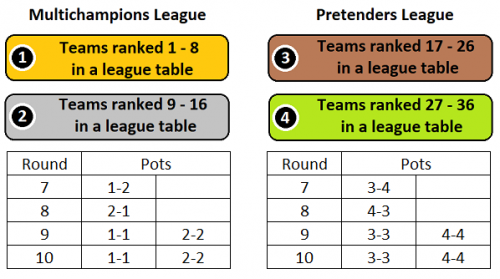 12. The cup competition starts with the Golden playoff. All promoted teams play in the playoffs (except Golden Four teams). 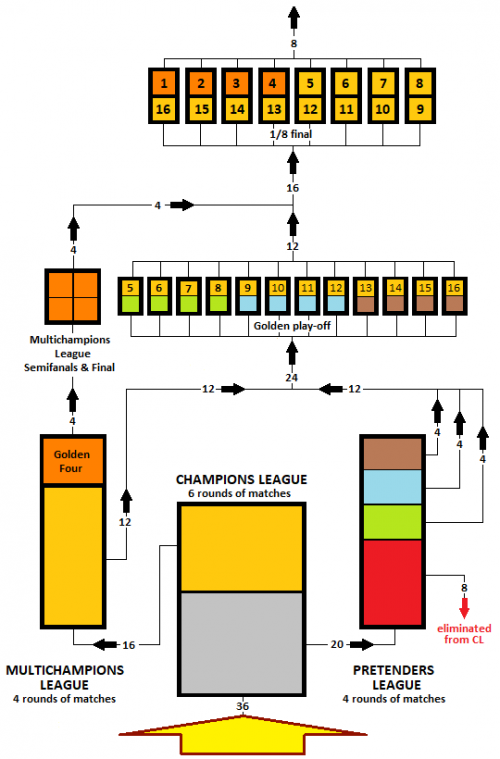 The solutions presented in the topic “What should be the correct format for the Champions League from 2024”, such as Relative points and other coefficients or Global solution (following the revision of CL according to this proposal) can also be used in the above proposal.